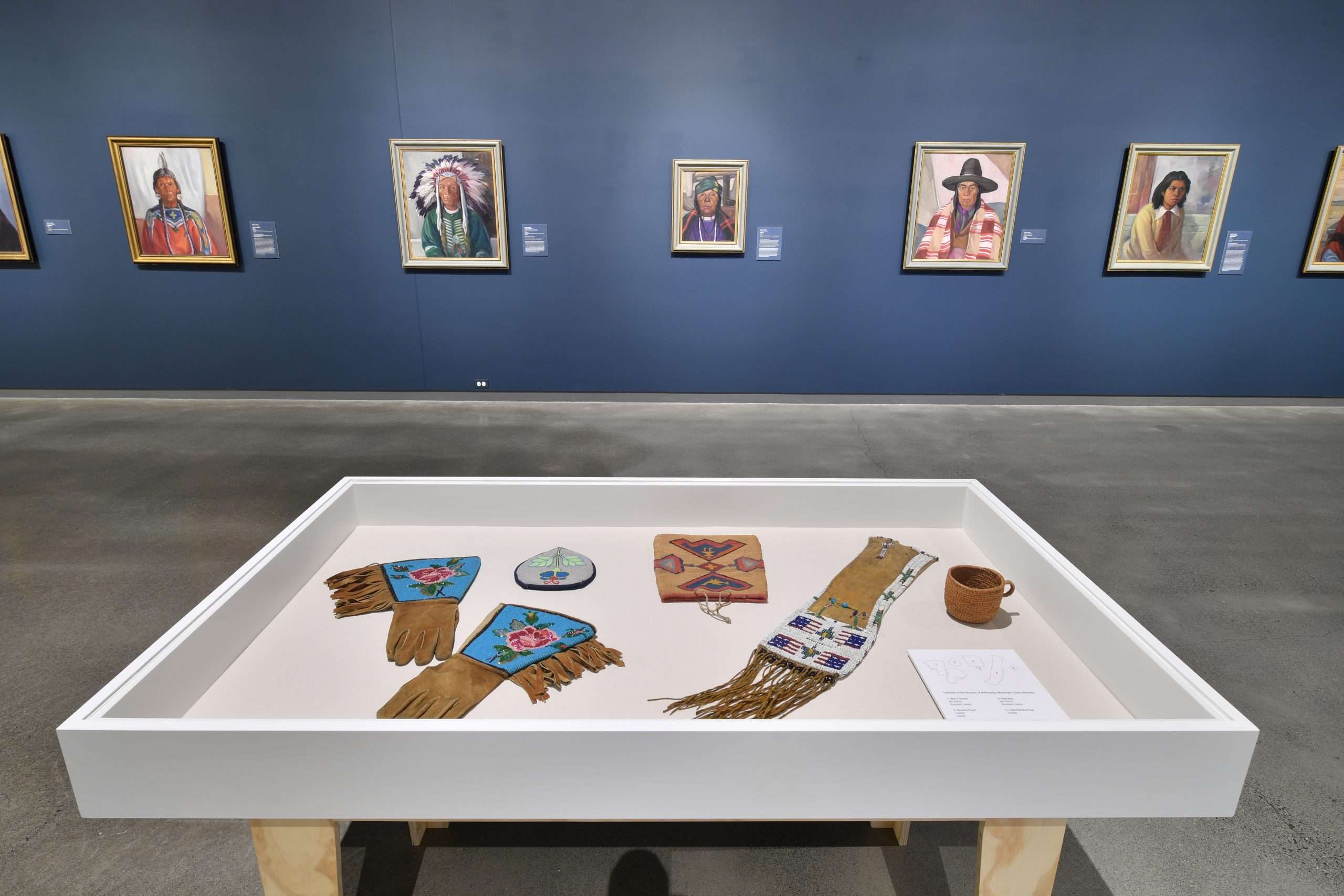 A coda to the proceeding Follow the Sun: The Holland and Orton Collections exhibition, Follow the River: Portraits of the Columbia Plateau will reframe the museum’s Worth D. Griffin Collection of Native portraiture alongside cultural materials from Plateau tribes including the Palus (Palouse) and Nimiipuu (Nez Perce) whose homelands the Washington State University Pullman campus is located upon.

In the summer of 1936, Washington State College (WSC) Fine Arts Department Chair Worth D. Griffin (with the support of WSC President E. O. Holland and the Board of Regents) began an ambitious series of oil on canvas portraits of “Indians of the Northwest tribes and other historic characters.” This commissioned project focused on prominent pioneers and tribal leaders from the Inland Northwest. It was recommended that Griffin take note of the mid-nineteenth century Pacific Railroad Survey Reports, particularly their illustrations and ethnographic descriptions of American Indians of the West. Griffin expanded upon these resources with his artistic expertise in portraiture, while dutifully engaging the ongoing and erroneous public perception of Native Americans as a vanishing race.

Viewing Griffin’s work today is quite telling in regard to what he accomplished artistically, as well as what was glaringly absent in his portrayal of regional tribal members. This installation will highlight Griffin’s work while offering the audience a more complete portrait of the indigenous peoples he painted over eighty years ago. Portraits of the Columbia Plateau will address the tribal permanence in the region, including their material culture (past and present), their pursuit and solidification of tribal sovereignty, and their ongoing commitment to future generations.

The exhibit presents paintings and drawings from the Jordan Schnitzer Museum of Art WSU collections, Plateau cultural materials from the Museum of Anthropology WSU as well as the Northwest Museum of Arts & Culture, and associated Plateau tribal ephemera from Manuscripts, Archives & Special Collections WSU. The exhibition is guest curated by WSU Fine Arts Professor Michael Holloman an enrolled member of the Confederated Tribes of the Colville Reservation.

LOCATION | The  Jordan Schnitzer Museum of Art WSU is located in the Crimson Cube (on Wilson Road across from Martin Stadium and the CUB) on the WSU Pullman campus. For more information please contact the museum at 509-335-1910. The museum is currently open Tuesday through Friday from 1-4 PM, Saturday from 10 AM to 4 PM, and closed Sunday and Monday.